The long-term goal is that Mill Lake Books will operate somewhat like a writers’ cooperative, providing an umbrella under which books can be published. Currently in Canada, the publishing industry is set up in such a way that almost everybody makes money except the writer. That has to change. Writers cannot go on indefinitely working hard and losing money.

João Garcia, Never Alone: A life of faith and total dependence on God

This is the inspiring autobiography of a pastor and missionary whose every step was guided by God. The book is sprinkled with photos and is written in an easy conversational style. In it, João Garcia takes us on an intimate journey into his life of faith, from his childhood in Brazil as the son of Spanish immigrants, through his call to ministry and preparation both in Brazil and at Spurgeon’s College in London, to his pastoral and teaching ministries back in Brazil before coming to Canada as a Baptist missionary pastor bringing the gospel message to Portuguese-speaking newcomers and helping them find their place in the community and in the church. Whether living through a military revolution or mingling with hippies at Piccadilly Circus, whether finding a life partner or a fulfilling vocation, João Garcia depended on God for direction. Sometimes opportunities came effortlessly, and sometimes there were years of hard work, but always his faith was in God. Throughout the years, in every circumstance, God was at work showing the way, and João Garcia was never alone.

Fran Bosa, One Life on Earth

One Life on Earth is the autobiography of a young woman whose life has been marked by tragedy, loss, and hardship. Her brother was shot, her father died, her family lost their home, she lost a child, she suffered burnout, and she was near death three times. But this is also a story of perseverance and victory. After recounting her story, Fran Bosa explains what she has learned and where she has learned it. This book includes excerpts from the writings of Rick Warren, Joyce Meyer, Beth Moore, and other Christian leaders, whose words have encouraged and blessed Bosa and molded her into the women she is today. Fran has lived what she admits to have been a messy life, marked by unexpected tragedies and personal struggles—but also by unexpected blessings and personal triumphs. As Fran explains, we are all on a journey, and there are two paths we can choose. After some detours and false starts, Fran chose the path less traveled by, the one that leads to eternal peace and joy.

James R. Coggins, Living for God in a Pagan Society: What Daniel Can Teach Us

North American Christians are living in a society that is increasingly non-Christian and sometimes even anti-Christian. Accustomed to living in an at least nominally Christian society, many North American Christians are unprepared for the new reality. Where can they find a model for how to live for God in a God-defying culture? This book argues that the early chapters of the Bible book called Daniel offer just such a model. Living at a time when the people of God had suffered a crushing and shocking defeat at the hands of the pagan Babylonians, Daniel and his friends were immersed in a society where the state, the education system, the culture and religion were all thoroughly pagan. In this situation, Daniel and his friends committed themselves to a course of action that North American Christians can use as a pattern to guide their own lives. The book consists of an introduction and ten chapters. It concludes with study questions on each chapter and then a statement of commitment, which summarizes the teaching of the book and which the reader is invited to sign as an indication that he/she is committed to putting into practice the lessons of the book.

Matthew R.S. Todd, What Does Athens Have to Do with Jerusalem? Eight Interdisciplinary Conversations Integrating Faith and Reason 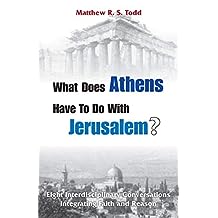 Tertullian (c. 160-240 AD) expressed concern over the yoking of faith and reason in his famous question: “What is there in common between Athens and Jerusalem? What between the Academy and the Church?” This question is woven throughout this volume, in which every chapter explores the linkages between faith and reason. While accepting that the existence of God cannot be conclusively proven—or disproven—this book offers an apologetic for the plausibility of the existence of something more than just a material world.

Mice are living cozily in a forty-seven-year-old mattress and box spring in a bedroom on the second floor of an old white farmhouse. The comfortable lives of the resident rodents are forever altered when a new mattress and box spring replaces their former home. Survival now becomes their priority. This is a story told on two levels, offering insights into the lives of Sophie and Herb Brunzhoffa and also the lives of the mice who live on their farm. It can be seen as an elaboration of Robbie Burns’s observation that the best-laid plans of mice and men often don’t work out as they expect. This novel offers no simple answers to the vicissitudes of life but is indeed “an allegory of tenacity, adaptability and acceptance.”

This book is a compilation of personal narratives built around Matthew Todd’s life as a husband, a father, a pastor, and a professional. He uses these narratives to reflect on the problem of evil in human life. This volume does not purport to be a comprehensive academic and philosophical tome on the problem of human pain, suffering and evil. Instead, the approach is of one person sharing some personal experiences and theological reflections with family and friends around a coffee table. The difficult experiences include serious accidents, major illnesses, job losses, unexpected deaths and criminal attacks. In the midst of these events, Todd offers no simple answers—apart from the comforting thought that God is always with us no matter what we face and the affirmation that God is good and negative circumstances don’t change that. The stories in this book reveal God’s grace in the midst of hard times. They argue for a Christian faith that says, “Though he slay me, yet I will hope in him” (Job 13:15 NIV) and “If you throw us in the fire, the God we serve can rescue us…But even if he doesn’t, it wouldn’t make a bit of difference…We still wouldn’t serve [the] gods [of this world]” (Daniel 3:16-18, The Message).

What would have happened if the Yes side had won the 1995 referendum, separating Quebec from the rest of Canada? 1995: Je me souviens provides one possible answer. In this riveting novel, Jean Tonnerre explains to his son Pierre what conditions and actions made it possible for the Separatists to win that vote and what could have followed as a result. The story focuses on the fate of Jean and eleven other young men deemed “apostles of the new Quebec.” Also described are such events as The Long March to Nowhere, The Time of Random Atrocities, The Unquenchable Fire, and The Advance of the Tanks. The novel explores Canadian socio-political realities and possibilities, but goes beyond them to consider the factors that make it possible for any society to function politically, socially, and economically. In effect, it is a reflection on the human condition.

When spring finally arrives in Winnipeg, the residents believe they have earned it. After enduring six months of snow and numbing cold, they look forward to April. Snow gives way to rain. Migrating birds appear. The trees swell in anticipation of new leaves. And the lifeless bodies of young women are discovered lying along the wooded paths next to Assiniboine University.

The long-awaited fourth John Smyth mystery skillfully intertwines two elements–an academic discussion of the nature of the mystery novel and an actual murder mystery. When John Smyth, the diminutive editor of a Christian magazine, returns to school to obtain a journalism degree, he encounters a variety of interesting characters. He debates a combative professor who challenges his faith. And, as usual, he can’t help stumbling over a dead body.

Visiting Mrs. Morgan is an essential guide for chaplains, pastors, elders, deacons, parish nurses, church members, family members – and anyone else who might have occasion to visit someone who is aging, homebound or in a hospital. The nine chapters creatively address common circumstances visitors are likely to encounter and offer practical suggestions for how visitors might interact with seniors in a way that sensitively expresses care and love. The book can be read by any individual but can also be used as a handbook for a 10-week group discussion. Author Julia Quiring Emblen has had an extensive career in nursing and helped establish BSN programs at Bethel College in Newton, Kansas, and Trinity Western University in Langley, British Columbia. Currently, she oversees a visitation program in her home church.

The Fraser Valley has often been described as “the Bible Belt” of British Columbia, and the city of Abbotsford as “the buckle of the Bible Belt.” The terms have frequently been used to present a simplistic and negative caricature of the city. The eleven essays in Being the Church in Abbotsford show a more complex, multi-layered view of Abbotsford, highlighting topics such as inter-church engagement; spiritual care in the hospital; the need for interfaith dialogue; faith and social concern; faith and the arts; faith and education; faith and business; and faith and politics. In some senses, the book can be seen as a sequel to The Church in the Heart of the Valley: 1892–1992 (edited by A.J. Klassen, 1992), but it attempts to reflect more profoundly on the reality of the city. Dr. Jonathan S. Raymond has called it “a must read for those interested in the future of our cities and towns and the collective contribution of their faith communities.”

Vern Heidebrecht, The Best Is Yet To Be

Vern Heidebrecht is a highly successful Christian minister whose pastorates have been marked by long terms and remarkable church growth. His career culminated in him coming to his home town of Abbotsford, B.C., where he helped Northview Community Church grow into one of the largest churches in Canada. What is surprising about this autobiography is that it is not a listing of his achievements but a frank description of his struggles, as well as what God taught him along the way. Brian Stiller, Global Ambassador, World Evangelical Alliance says, “Vern Heidebrecht’s autobiography is a marvelous presentation of the Christian theology which shaped and transformed his life.” Other readers have described the “warm, evocative story-telling” of someone through whose life “we are and being pointed heavenward.”

David Collins, Out of the Box: Moving from Religion to Intimacy with God

Out of the Box is based on a simple assumption: The knowledge of God is vast and largely undiscovered. There are immense oceans of truth still waiting to be found. Mark Buchanan, author of Your Church Is Too Safe, says, “David can console and startle in equal measure, sometimes in the same sentence. If you’re looking for a collection of bland platitudes, choose another book. If you could use a jar of spiritual hot chili peppers, you’re holding it.” Darrow Miller, co-founder of the Disciple Nations Alliance, adds, “David’s new book will challenge you to reflect more deeply and think more widely. It is a wonderful encouragement for each of us to face our hard days with a fresh spirit.”